A new chapter in my project: since Saturday December 7, 2013 all 14 prints and the accompanying film are displayed at the fine Form Design Center in Sweden's third city Malmö, just across the bridge from Copenhagen.

The posters are for sale.

Stamped, numbered and signed. (Only a few are sold out: this one, this and this.) 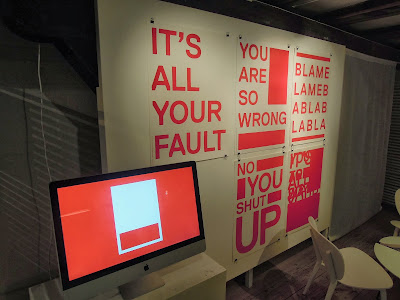 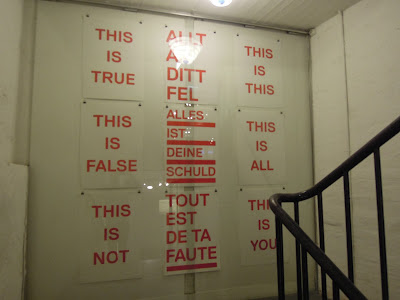 Today's the last day of my show.

Please pop by if you have the opportunity, it's open until 6 pm. Or actually even later tonight as Rönnells are arranging yet another great event.

For those who won't make it, here are three images of what I had, so to speak, in store for you.

The miniature interior in the window can be better seen here and here.

I will come back with news on this project. One of the posters will appear in large numbers at a major artistic exhibition about interior decoration in Stockholm this summer, and rumor has it that they will all be displayed in Malmö in the near future.

On Sunday I leave for a week in mainland Europe to see if there is an interest in my work in Düsseldorf, Hamburg and Copenhagen.

My train stop in Hamburg is two hours so, just enough time to take a "poster-on-tour" picture I suppose. 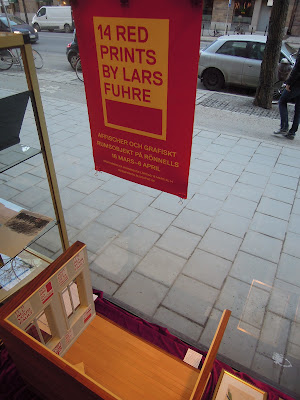 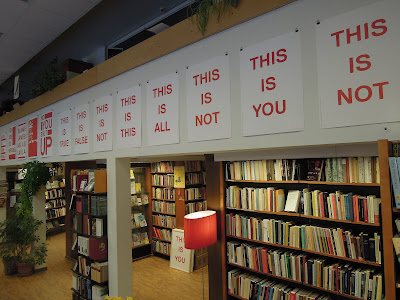 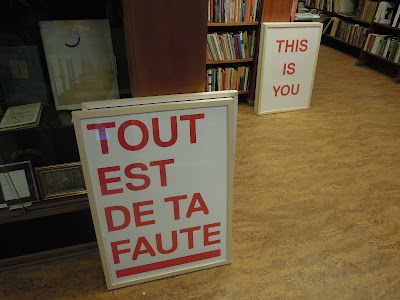 The exhibition is up and running.

Unfortunately Rönnells will be closed for the Easter holidays.

Luckily, for me, all of my show can be seen from the street, even the miniature interior RED PRINTS ROOM, which is placed in one of the windows. 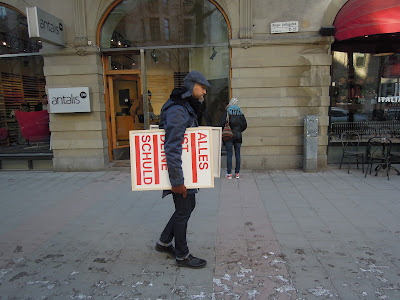 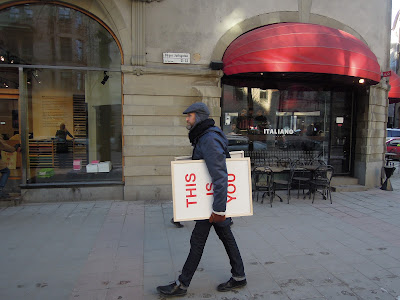 My 14 minutes of fame are soon over.

At the opening on Saturday, with some 70 guests all in all, I tried to explain my project in a short welcoming speech before introducing Torbjörn Elensky and his reading of his text about the prints.

It was a great moment, albeit not exactly like I wanted it to be.

Friends and family and some unfamiliar faces, no hostility.

I got too carried away and didn't breathe enough to say what I wanted.

Most people know what it's like to host one's own party.

Hosting your own exhibition and trying to make into something a little bit like an afternoon tea party adds to the confusion that would already be there, were you only "throwing an exhibition".

Luckily, I had manufactured just enough tea bag tags to last for every guest and so (still wearing a silly beard then) I offered them to everyone, to pick their favorite message from this plate, before I started the speech. 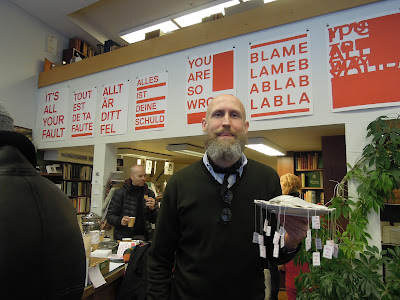 Conversation pieces, check. (I hate that expression by the way: Check!)

Anyway, I wanted my speech to have been more like this:

As I feel the atmosphere is friendly and in good spirit, I would like to take this opportunity to talk about who I really am.

I have hidden my real identity much too long.

Working some 20 years as a graphic designer and an art director/creative director with commissions from clients of all kinds I have always remained true to one secret vocation.

I am and have always been an artist, regardless of this definition.

And all the same, this is my solo show debut!

Over the years, I have taken part of a few design exhibitions, always group shows (and only actually in other countries than Sweden.)

For years I have longed to be the subject of my own art, and not the interpreter of someone else's messages.

And so, in conjunction with a teachers' exhibition at Beckmans College of Design, where I am a senior lecturer, I started to work with negative messages, in red, in the fall of 2011.

The very first poster was IT'S ALL YOUR FAULT.

Since then the one theme has been different versions of accusations.

A year later I had the original message translated into Swedish, French, and German.

Each language is charged with different connotations, depending on the combination of words and, let's say, cultural traditions and history.

In addition to these, the other theme, a series of "matter-of-factual" messages, have been printed in two sets.

I have wanted to work with these two subjects in order to, for one thing, explore our relationship with blame as a human reaction to anything that goes wrong, and for the other, to examine the extreme certainty of assertions - also human? - that some people sometimes display. (Other people: always.)

To simplify, I believe that we as humans can be divided into two groups.

• Some people always blame others.

• Others always blame themselves.

• Some people always have the answer.

• Others always question the answer.

In everyday life I often wonder about my own reactions concerning these issues.

I look upon myself as a man who, as a reflex, blames himself.

But then again, I don't really have any problems with placing guilt on whoever is nearby, when something goes wrong.

I believe we are all affected with both qualities. Some people are just more extreme than others.

The past weeks I've been blaming my beard for a lot of things.

I decided to let it grow when, in December, the plans for this exhibition came about.

I have now shaved.

Sometimes, the best way to liberate oneself from a problem is simply to get rid of it.

Clemens Poellinger (link in Swedish only) wrote a summary of my art. Quite to the point with few words.

To explain this project fully, however, I need to go through its different parts.

In its entirety the project includes not only the 14 posters and the miniature interior Red Print Room.

The exhibition also comprises this blog, a printed 24-page pamphlet, a short film (+ some clips), and a Spotify playlist  (which I don't expect will grow much further, even though it has had two songs added to its original "14 SONGS OF GUILT AND BLAME").

Not least the playlist was a joy to put together.

A late developer with the wonders of Spotify, making the list threw me back to teenage years and the bliss of compiling the most important songs ever.

This pick of tunes was done very fast, and with not so discriminating a selection as in a mixtape of one's youth.

Regardless, it's worthwhile not only to listen to the music. Listing the songs' titles creates some kind of poetry:

She told the students something like this: "If you have a problem, put it on a list and deal with other stuff instead".

Thank you for your attention. 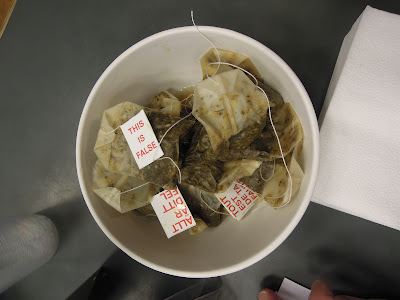 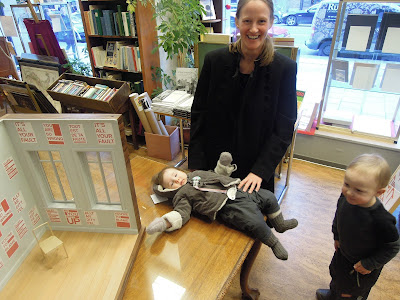 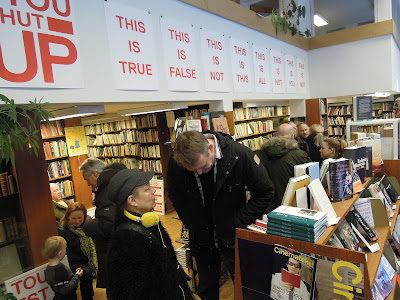 And thank you Catarina Landberg for helping me with all the printing business.

At least one person at the opening admitted to having been fooled by the close ups I posted March 8, of the interior on display at the exhibition.

As long as I fool one I am happy.

And I find much pleasure in publishing the image below.

I have hoped it would be a spoiler for anyone who might have imagined I had actually decorated a whole room with my prints.

Considering the effort it took to create this miniature, however, I suppose it would have been a lot easier to make the room in scale 1:1. 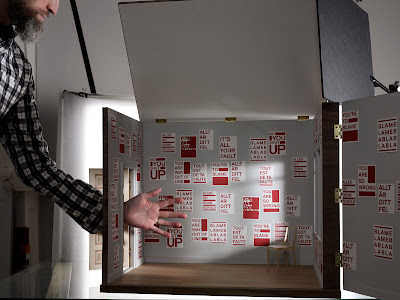 Email ThisBlogThis!Share to TwitterShare to FacebookShare to Pinterest
Labels: Fooling

Truly one of the greatest outcomes of my exhibition.

This precocious girl, the daughter of a friend, saved one of the tags for the teabags I manufactured for the opening, and made into a ring.

Apparently she wore it to school today.

I have the girl's and her mother's permission to publish this image. 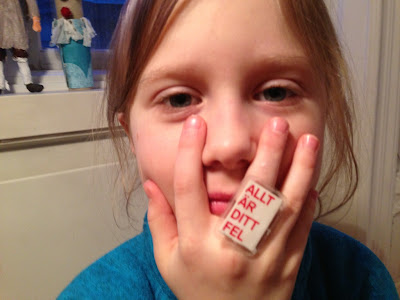 (Translation: Everything is your fault.)

Things like this occasionally go on at selected artists' homes less then one hour before the opening of a show.

On Saturday March 16th the exhibition 14 RED PRINTS BY LARS FUHRE opened at Rönnells Antikvariat, the finest second-hand book store in Stockholm, on Birger Jarlsgatan 32. This blog is part of the exhibition which officially closed on April 3. However, the posters are still displayed (and for sale) at Rönnells, on the big wall by the stairs. Please send me an e-mail if you are interested in a poster, or a lecture about this project, or anything else: lars@fuhre.com